Ninjas! In this lesson we’ll be learning how to play I Bet You Look Good On The Dancefloor by the Arctic Monkeys which was the bands first single, released on 17 October 2005. The track debuted at #1 on the UK Singles Chart, won Best Track at the 2006 NME Awards and was also a hit in the United States, hitting #7 on the US Modern Rock Charts. 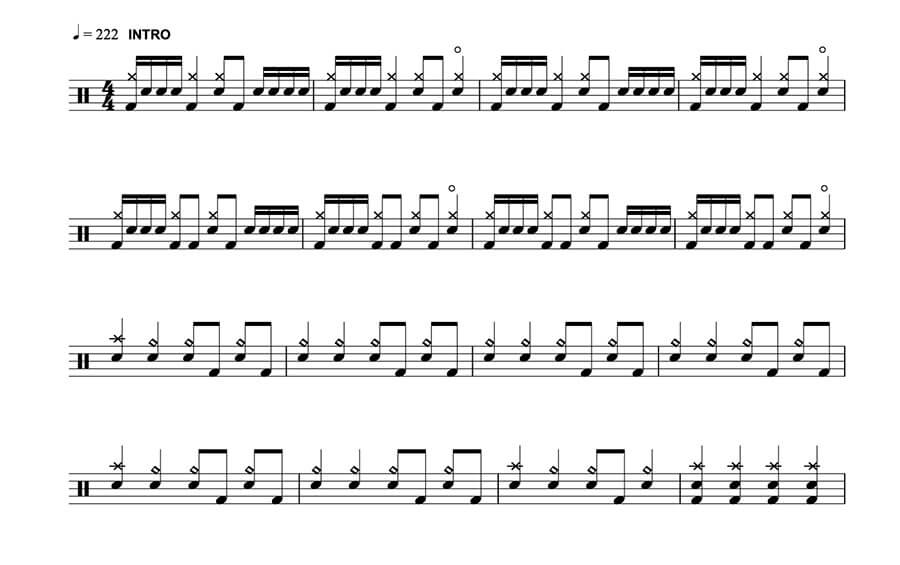 Matt Helders wrote a dynamite drum part for I Bet You Look Good On The Dancefloor that’s had a lot of drummers scratching their heads since the song came out. This up-tempo indie-rock track has some tricky little passages and a whole lot of energy.

Intro
The intro of the track is probably the most challenging part with rapid sixteenths on the snare dotted between a 1/4 note groove that follows the guitar riff. There is an extra bass drum note on the second four bars of the intro so follow the chart on your first few run-through’s.

Verse
The verse groove is composed of 1/4 notes played on closed hi-hats, backbeat on two and four and the bass drum following a two bar pattern. There is a unison hit between the hi-hat, snare and bass on beat two of the second bar which you really need to line up nice and tight to make it work.

Chorus
On the chorus you’ll find the hi-hats, snare and bass drum all play quarter notes which create a really edgy and energetic feel. Avoid rushing when you play this because it’s easily done.

The big challenge with this track is the intro passage. Spend some time playing it a half-speed until you have all the notes lined up where they should be. Then you can start to slowly increase the tempo in 5-10bpm increments.