The Roland VAD306 is a hybrid electronic drum kit from Roland that mixes electronics with acoustic drum shells. The large drum shells make the kit feel more authentic to play on and look more attractive on stages.

While this isn’t the latest hybrid kit from Roland, it still holds up very well in the competitive market. We’re going to take you through everything that makes this kit so good. We might give a few cons as well. Stay tuned!

The most prominent feature of the kit is the acoustic shells. While they’re intended to look like a standard acoustic kit, the shells are shallow than typical acoustic shells. They also have no resonant heads attached to them. This gives you the appearance of an electronic kit that has slightly larger drums than normal.

The kit comes with a Roland TD-17 drum module. It’s a powerful module with over 300 onboard sounds and 50 preset kits. It allows for easy manipulation of those sounds as well which is great.

The drums are designed to mount onto regular hardware. This brings it closer to feeling like an acoustic kit. Unfortunately, no hardware is included when you get the kit. Check out our hardware buying guide to see some good deals.

What To Expect from This Electronic Drum Set

The shells are made from wood, giving you a unique electronic drum set that resembles an acoustic kit. The mesh heads that are attached to the shells are tuneable, meaning you can adjust their tension to be tight or loose. This allows you to get the authentic feel that you’re used to from acoustic drums.

The shells are covered in a smooth black gloss wrap are finished off with some shiny chrome hardware. The kit looks great and is a far superior alternative to regular electronic kits that have thin pads.

This makes the kit feel way more solid and durable than a standard electronic kit. Unfortunately, the kit doesn’t include all this hardware when you buy it. It needs to be purchased separately. 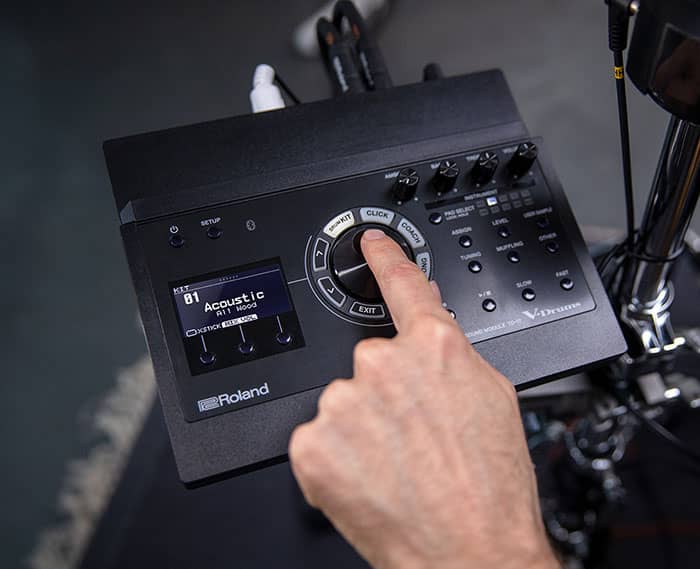 The TD-17 module pulls many sounds from Roland’s flagship TD-50. This particular module is just a bit more compact. However, it’s still full of great features. The sounds that are included will cover every style of music you can think of.

If you’re not a fan of the sounds, you can import your own onto it via an SD card. The possibilities are endless thanks to this feature.

The module has a Bluetooth feature, allowing you to stream music to it wirelessly. Most electronic drum kit players have had bad wire experiences, so the Bluetooth is a fantastic feature to have.

If you’re not a fan of the Bluetooth function, the standard cable setup or MIDI connection works solidly.

The kit comes at just over $2500. While that’s fairly expensive, it’s a lot more affordable than many other electronic kits on the market that offer similar features. The closest competitor to the VAD306 would be the Alesis Strike, which costs almost the same.

Everything else comes at way higher prices. So, the price-to-value ratio is very good with the Roland VAD306! It’s not the most affordable kit around, but it’s well worth the money you’re paying for it.

The VAD306 and the VAD605 may look very similar at first glance, but there are two very distinct differences. The first difference is that the VAD506 is larger drum shells. They aren’t shallow like the ones on the VAD306. Instead, they look exactly like the shells you’d see on a standard acoustic kit.

The second difference is that the VAD506 uses Roland’s TD-27 module and the VAD306 uses the TD-17 module. The TD-27 module is a lot more advanced and has way more features.

These two big differences make the VAD506 a lot more expensive. So, if you can afford to pay more, it would be better to go with the VAD506. If you can’t, the VAD306 is a perfectly good option.

If you have larger budget you can also check the big brother the Roland VAD706 here.

The Pearl e/Merge is strikingly similar to the Roland VAD306. It’s also an electronic drum kit that’s kitted out with shallow acoustic drum shells, giving the appearance of a hybrid set.

One big difference is in the bass drum. While both bass drums are fairly large and deep. The bass drum on the Pearl is slightly deeper, feeling better to play on.

The Pearl also comes with a fully functional rack system to mount all the drums to. This means you don’t need to buy anything extra to get the drums set up.

The Pearl is a lot more expensive, meaning it’s a closer competitor to the Roland VAD506. However, it’s worth looking into if you’re considering getting any hybrid electronic drum set.

The Alesis Strike Pro is one of the biggest electronic drum kits on the market that you can buy. It’s a 6-piece drum set with deep wooden shells, giving it the appearance of a standard acoustic set.

It also has 4 cymbals and a pair of hi-hats, the largest amount of cymbals you can get with any single electronic set. The value to this kit is massive.

It’s more affordable than the others because Alesis specializes in providing affordable electronic sets. The onboard sounds are just not as good as the ones from Roland.

Roland VAD306 in the Studio

The kit works excellently in the studio thanks to the large number of preset kits to choose from. The drums are responsive enough to compete with acoustic drums and the USB recording capabilities make the recording process a lot easier.

Roland VAD306 for a live Gig

What is the best Roland drum module?

Roland’s current best drum module is the TD-50. It’s used in all of Roland’s top electronic drum kits and it’s packed with incredibly high production value. Not much matches it in terms of sound design, onboard features, and overall usability.

If you get your hands on a TD-50 drum module, you’ll have a seriously powerful device that can take on almost any situation.

Is Roland a good brand for drums?

Even though Roland is the best, it’s important that you check out all the competition to make your own decision on which electronic drums you should get. Sometimes one company will provide something that the other ones don’t.

Why are Roland V drums so expensive?

Only the higher-quality kits that Roland puts out are very expensive. The biggest reason is that the drums cost a lot of money to make. The brand is working with technology that is constantly evolving and bringing in new costs.

So, the drums are expensive to buy because the brand needs to make a profit after all the production costs. It’s not only Roland that has expensive electronic drums. The top kits for Yamaha and Alesis are also fairly expensive.

With that being said, electronic drum kits have come a long way and there are plenty of affordable e-kits that you can get. Most of them sound and look great!

Getting back to the Roland VAD306, it’s something you should consider getting if you want an electronic kit that looks great on stage or in videos. It’s a fantastic alternative to an acoustic drum kit because it still keeps the appearance of standard drumming.

The TD-17 module is great and the fact that the drums are set up like a normal drum kit is even greater. Just remember that you need to buy the hardware separately.

Roland has made a few of these hybrid kits. We’ve done some reviews on them so check those out as well.